John Calahan » About Me

My name is John Calahan, and I am the K-6th vocal music teacher at Mount Ayr.

I grew up in Lincoln, Nebraska where I attended school. My favorite class was music (can you believe it?)! After graduating, I attended Morningside College in Sioux City and received a Bachelor's degree in Music Education. While in Sioux City, I met his wife to-be Autumn, and we have been married since 2014.  The Calahan family also includes three cats, Ted, Floyd, and Peter, who can be a handful at times!
This is my tenth year in music education. Alongside general music and choir, I have also taught classes in guitar, music technology, and directed several plays and musicals. In my free time, I enjoy playing instruments, singing, woodworking, and helping with the community theatre in Creston. 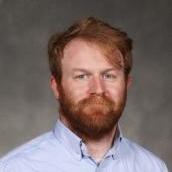